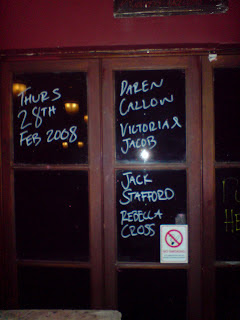 It's a fair old trek to Ealing Broadway from Crystal Palace, but well worth the trip. Thursday night saw me making said journey to appear at a showcase at Finnegan's Wake on Ealing Green. It was a really fun night with a small (but attentive) audience and three really good other acts. As seems to be the case quite a bit these days I was on first, but really enjoyed playing All I Want Is You, Obsession, Vulnerable, Do You Want to Dance and Lullabies. Although I had intended to play Home, but I had a mental block and couldn't actually remember the chords?!

Up after me was Rebecca Cross, who had actually come over from San Francisco to play (which is actually the biggest trek any of us had). She played a very soulful and enjoyable set. She was followed on stage by Victoria & Jacob, who have an eclectic mix of acoustic guitar, xylophone, melodium and sleigh bells. Victoria has a great vocal style, and their set was mesmorising and sparse.

Finally Jack Stafford took the stage sporting a fantastic moustache (the facial hair quotient on stage was very high, with my goatee and Jacob's full beard) and played a very entertaining and clever set. He'd come from Amsterdam, and Victoria & Jacob were from Cambridge, so we really were a far flung crowd.

Not only were all the artists great performers and entertainers, but they were also thoroughly nice people, and we all had a great evening despite the small crowd. Many thanks too to Tristan who did the sound and hosted the evening.

I'm working on two new tracks this week, and hoping to get another podcast recorded on Tuesday this week. Stay tuned!
Posted by Daren at 2:17 PM

You have been tagged x

That's a cool pub. I've been there a few times! I used to live in Ealing.

Vi: Yeah, Ealing has gone up in the world since I was last there. Fancy a nostalgic return visit on the 20th?