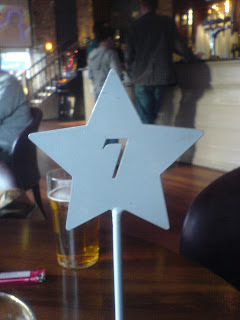 My best friend Peach has tagged me to blog a list of seven things of which I approve. Now as she points out this is not the easiest exercise in the world, but I guess the randomness of it is part of the fun. So this is by no means a definitive list but rather the first seven things that came into my head (minus music which since this is really a music blog and not a "personal" blog as such I thought I would have a holiday from).

Did you know that the number seven has ancient and spiritual meaning far beyond its basic value as being one more than six. In the bible it was used on many occasions to signify special meaning. God created the earth in seven days because of this significance (not some literal event), something utterly lost on Creationists. The idea for and length of the week also came from these origins, rather than the other way round, in case you were wondering. The "clean" animals were loaded into the Ark in sevens as opposed to the "unclean" animals that were loaded in twos. Seventy times seven was thought of in much the same way that we think of infinity now, ie the biggest number possible rather than the more prosaic meaning of 490. Anyway, history lesson over, here beginneth the list:

1. Englishness - not some flag-waving nationalism mind you, but the concept of living and being in mainland England and the elements of character this implies. By it's very nature the English are a mongrel race and this is what I whole-heartedly approve of. The Angles after all were Germans and so, for that matter were the Saxons. Along the way we've acquired heritage and genes from the Scandinavians (Vikings, Norsemen), Italians (Romans), Celts and (god forbid) French (Normans) to name but a few. More recently you can add African and Indian influences to the melting pot and you come up with the thing that I call Englishness. I get the feeling that it's all to do with intelligent, itinerant, creative people coming here and then being beaten down by the weather, whilst simultaneously falling in love with the range of natural beauty we have here and creating the slightly curmudgeonly, highly original race that we are now. A land of real diversity.

Did you know that the UK's most popular dish - Chicken Tikka Massala - is an example of this hybrid culture... it's an English invention dontchaknow. Oh and did you also know that the Romans gave the Scots bagpipes and haggis (amongst other things). The less said about the Romans the better though.

2. Football - well actually all sport. It is after all the more civilised version of war and for that alone I endorse it. We cannot survive as humans without tests of strength and tribalism, and since I am utterly opposed to war, sport is the next best thing and should be encouraged as much as possible.

3. Scepticism - I have nothing against other peoples views, and I do not claim to know anything definitively. I cannot disprove the existence of aliens, fairies, the spirit world or god. But I know that I prefer to treat with them with a healthy dose of scepticism and don't believe it makes me any less an interesting person. I'm not even asking anyone else to follow my lead in this, I just know that I approve of that way of viewing the world, and that's about that.

4. Science Fiction - on the other hand I do like to take my brain on journeys through the extraordinary. I like to dream and I like to create worlds and stories in my head. I've read comics for as long as I could read, and now I enjoy Sci-Fi more than any other literature. I still long to climb into my spaceship, pick up my laser gun and crusade across the universe...

5. BMWs - by which I mean all purveyors of German sports cars.

6. Guns for Kids - at the risk of sounding a bit "they did me no harm" heere I'd like to vote for this one too.

When I was young a company called Airfix produced a small range of 3/4 size guns based on real weapons and quite clearly aimed (ha ha) at kids. They were must have items in my eyes and I spent my childhood running around the garden and the local streets and woods in a variety of para-military outfits shooting anyone that got in the way. Even at home I had a large collection of toy soldiers (from ho/oo & 1/32 scale figures to Action Man) with a bewildering range of authentic weaponary. In 1977 I swapped my lego Sten gun and cap guns for an Imperial Blaster and lightsabre, and carried on doing much the same.

In the Scouts I fired .22 rifles and pistols (real .22 guns, not air rifles mind, although we did shoot them too), I also had a 4 inch sheath knife and at least two other pen knives. I loved war comics and war films and even to this day I dream about stumbling across a new realistic arsenal in some imagined toy shop. In my mind I drove tanks, submarines, warships, jet fighters and death stars. I built forts and emplacements and drew the things I couldn't create on paper. I must have spent hours documenting and inventing these grisly scenarios and you know what...

7. Goths - they have the best clothes, get to wear make-up and bondage gear and listen to better than average music. They are all sweeties too. What's not to like?!


I think everyone I know has already been tagged, but just in case you haven't then I tag Cake and Nobby & Me.
Posted by Daren at 3:52 PM

You tag me cos you cant think of anyone else? How flattering! LMAO

On the subject of guns and knives, I think the difference is that in your day you had scout leaders to show you how to use these weapons and teach you a healthy respect for them. Penknives were for whittling. Guns were for target practice or killing small animals to put in the pot to feed the rest of the platoon. Things seem to be very different these days. My own son was involved in a skirmish in the local park that involved a friend's mobile phone and a penknife. They were 11 years old and the miscreant who tried to steal the phone was 13 or 14 with learning difficulties and a history of involvement with the local constabulary. However, had the friend not had an expensive mobile phone, the older boy would not have tried to take it and another boy would not have pulled out his knife to try to help the phone's owner to retain it.

Er no... as I said most of the people I know have been tagged already... I don't know that many people in Blog World. In any case, I didn't just tag you!

On the other thing, certainly it was true that we only fired real guns under controlled situations (air rifles were another matter), but as far as knives went I don't remember any special instruction. We were left to make our own mistakes a bit more than now and I think we ended up with a healthy respect for such things. Just my opinion of course.

So when we finally meet Dazza, I want you dressed as a goth!

Now that would be a sight to see!!

Dazza, I think the thing is that you had a healthy respect for such weapons because you saw the consequences of your actions. Nowadays, kids have computer games that simulate such violence and they become immune to the shock factor. They dont whittle a piece of wood and cut their finger and realise how much it hurts/bleeds and make the correlation between that and stabbing someone. They just see simulations stabbing/shooting each other, dying and being replaced by other people to stab/shoot. Everyone/thing is expendable without the horror of the actuality. I find it very scary.

As to the tagging, I shall give my seven things some consideration... x

ha ha ha a SMORGAS board of contradiction there mr d c - you like guns for children but not war? you like scepticism AND YET science fiction? Goths AND BMWs?

You are clearly terribly confused dear boy, no self respecting goth would go near a BMW, and where do you think children learn about war but from their childhood?

Although you may have a point. Kids at school I knew were not allowed to wear make up til they were about 16. When they did they all looked like Goths and drove BMWS (ha), I mean, drove us all crazy with their new found make-upping where the rest of us were pretty relaxed about it as we'd never had it made that elusive or forbidden... so I sort of see what you mean...

HMC: I see you point, certainly my thought was it's better to have the real thing, or near to it than some artificial simulation of such. As Bart Simpson said when he was asked by Lisa why he watched so many horror films, "How else can I get de-sensified?!" Scary indeed.

Peach: What contradiction?! For the record I never said I wanted to be a Goth or own another BMW, I just said that I approve of them. Different thing entirely.

Of course there were a few things that didn't quite make the list, including "Danger" and "People that wear hats".

Thanks for thinking of me.

And I think Peach is right. My teen was banned from makeup and piercings at her grammar school. So, at the weekends, she blacked up her eyes (and her carpet) and as soon as she had done her GCSEs, she was at the piercing shop rebelling!