That's You In The Spotlight 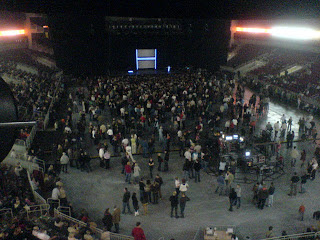 I had a go at another job on the tour, follow-spot operator. Simply this involved controlling a spotlight from one of the galleries, you listen to instructions, wiggle one knob and push some others, whilst trying all the time to keep a famous person or singer trapped in the glare of your headlight (as it were).

It's a surreal experience sending down this shaft of light and picking out a figure on the stage. They appear unreal, two-dimensional (you see no shadow) and trapped in a perfect circle of light. Wherever they go the light follows them and picks them out. Sometime the light goes ahead, sometimes it lags a little, but it always finds them in the end. There is no escape.

Of course I longed to be on the other side, the one in the spotlight.

It reminded me of another, earlier leg of the tour where the local production provided the spotlights. They arrived beaten-up in olive drab, with a distinct military air about them. We joked that perhaps they had been used previously on a border check-point or prison camp. There the idea is to search for people not being where they are supposed to be, and once caught perhaps shoot or at the very least raise the alarm. A whole different scenario that springs into my mind now whenever I'm using the light. Again, there would be no escape.

In that scenario, I know which end of the light beam I would want to be on.

On a lighter note...

I stayed in a hotel in Vilnius, Lithuania and had to get up obscenely early this morning. I asked the receptionist to get me a cab and after 5 calls he managed to do it. Taxis are hard to get in Vilnius, he explained. The cab duly arrived and we turned right out of the hotel and then immediately left into the airport. I had to laugh, I could easily have walked there in 10 minutes!!

(currently in Copenhagen, Denmark)
Posted by Daren at 6:22 AM

you'll be in your own spotlight soon enough - keep plugging your great stuff! Incidentally, you do realise you start all your posts with "So,....." !!